Papers for the conference had been circulated before the event. At the symposium, discussants began by responding to the papers which made for a high level of engagement from the word go.  Michael Lawrence responded to two papers: Karen Lury’s ‘“Let’s Go Fly a Kite…”: Balloons, Kites and Tethered Flight in Films For and About Children’ and Jennifer Beckett’s ‘An Allegorical Childhood: Identity and Coming of Age in Northern Ireland’.   Beckett’s paper was on Mickeybo and Me (Terry Loane, 2005), set in the 1970s in Northern Ireland, and which tells the tale of childhood friendship across the sectarian divide against a backdrop of the Troubles.  Using a framework drawn from the Liberation Psychology of Ignacio Martin-Baro, Beckett’s paper interrogated the psycho-social conditioning of Northern Irish identity to move, if tentatively, toward a position post-Troubles that might potentially be able to reconcile the past.  Lury, meanwhile, presented kites and balloons in a variety of films (for example, Lamourisse’s The Red Balloon (France, 1956); Jafar Panahi’s The White Balloon (Iran, 1995); Kore-Eda’s Like Father, Like Son (2013) as well as Mary Poppins) to show how kites and balloons might represent childhood in differing or similar ways across nations and through time.  While Beckett’s paper focused on a single, particular case of childhood, Lury’s paper presented a tropological approach.  Thus Michael Lawrence was able to discuss some of the many ways that the child has been used in film, as single or particular, or as representing universal issues; as relating to one nation or one cinematic movement or as transhistorical and transnational.  The child might be allegorical (compellingly available for story-telling or for exploring allegorical histories) or might lend itself to a variety of discourses.  The balloon or kite presented a particularly interesting perspective on the child’s point of view.  Not entirely dirigible, often willful and open to sudden, unexpected trauma, balloons and kites and possessing of anthropomorphic qualities the balloon or kite provided access to a variety of ways of thinking through the status of the child on screen. 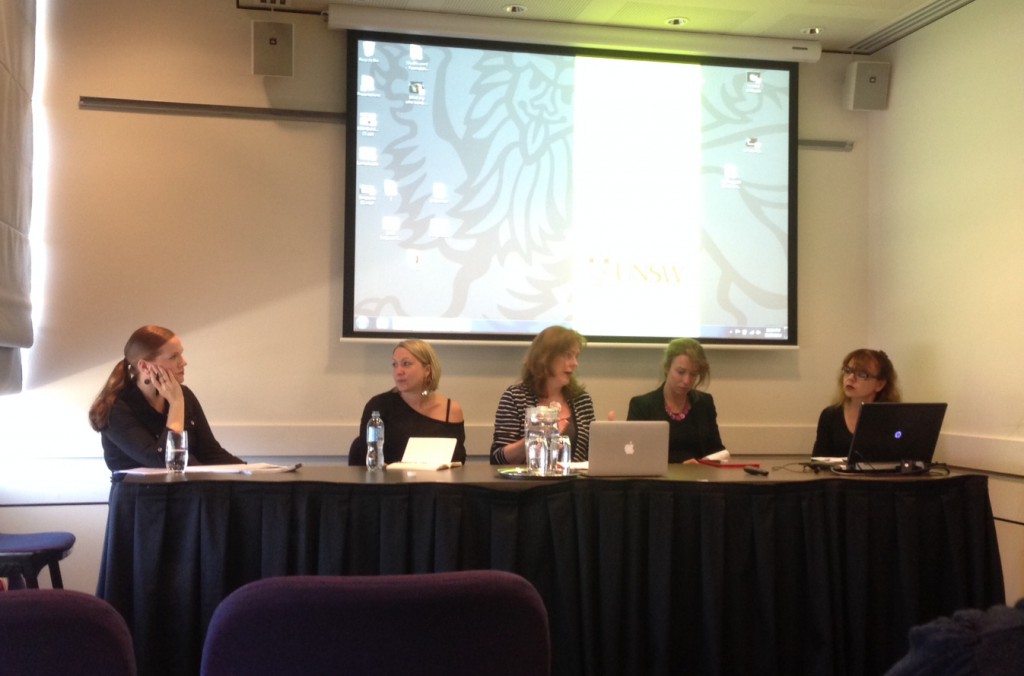 Joanne Faulkner and I responded to three papers by Daria Shembel: ‘Born in the USSR: Children vs. Ideology and the Impact of Database Cinema’, Jan Lanicek: ‘Among the Nations: Children as Czechs, Germans and Jews in the Czech post-1980 cinematic representation of the Second World War’ and ‘The Lost Children of Latvia: Children of the Ice’ by Klara Bruveris and Stephanie Hemelryk Donald. Viewers in the UK have grown up with Michael Apted’s now iconic series Seven Up, which, beginning in 1964, has followed the fortunes of twenty (which dropped to fourteen) British children at seven year intervals and continues into the present day. But the development of the UK series into a Soviet Union spin-off is less well known.  Daria’s paper insightfully analysed the ideological tensions surrounding the film including the law of 2014 banning Americans from adopting Russian children against a theory of database cinema.  Jan Lanicek’s fascinating subject, meanwhile, was post-1980 Czech film representations of the Nazification of Czech children in two films, Cieslar’s The Spring of Life (2000) and Cuckoo in a Dark Forest (Moskalyk, 1986) (as well as TV version of the war through a Czech girl’s eyes in The Train of Childhood and Expectation, Kachyna, 1984, 88).  The two films deal with Nazi racial experiments to replenish the Aryan race both through the ad hoc slaughter of the parents of the Czech girl Emilka and adoption by Otto Kukuk (who, it will turn out, belies his kindly father persona by revealing himself to be a Nazi concentration camp torturer) in Cuckoo in a Dark Forest and, in The Spring of Life, through Himmler’s racial breeding programme, Der Lebensborn. Lanicek brought out the fascinating screen-life of a nation still coming to terms with its traumatic past.

Finally, Klara Bruveris and Stephanie Hemelryk Donald’s paper ‘The Lost Children of Latvia: Children of the Ice’, returned us to the deployment of childhood memories to recall and re-inscribe a narrative of national trauma through film, in this case the Latvian traumatic displacements at the hands of the Soviet occupation as depicted in Dzintra Geka’s televisual project The Children of Siberia (2001-13).  Geka (who also worked on Lanzmann’s Shoah) arguably works to serve a larger national project of mourning but may ‘create an uneasy relationship with its subjects in quasi-therapeutic scenarios of irretrievable loss’.