On 28 July, as the opening event of the symposium, ‘Childhood and Nation in World Cinema’, director Sophie Hyde treated an audience of around 60 at the University of New South Wales to a screening of her first feature, 52 Tuesdays. The film premiered last November at the Adelaide Film Festival (in Hyde’s hometown), and since then has gone on to win critical acclaim both at home and abroad. Among a number of awards garnered this year, 52 Tuesdays won the coveted Crystal Bear at the 2014 Berlinale, as well as Best Director, World Cinema Dramatic at Sundance – no mean feat for a debut work. Undoubtedly, the film owes its success to a number of interlinked factors, provocative as it is both in form – made over the course of a year, by shooting once a week on a Tuesday – and content – equally about a young teenager’s emergence into womanhood, and her mother’s process of gender reassignment, developments that overlap and cross paths in interesting and unpredictable ways. 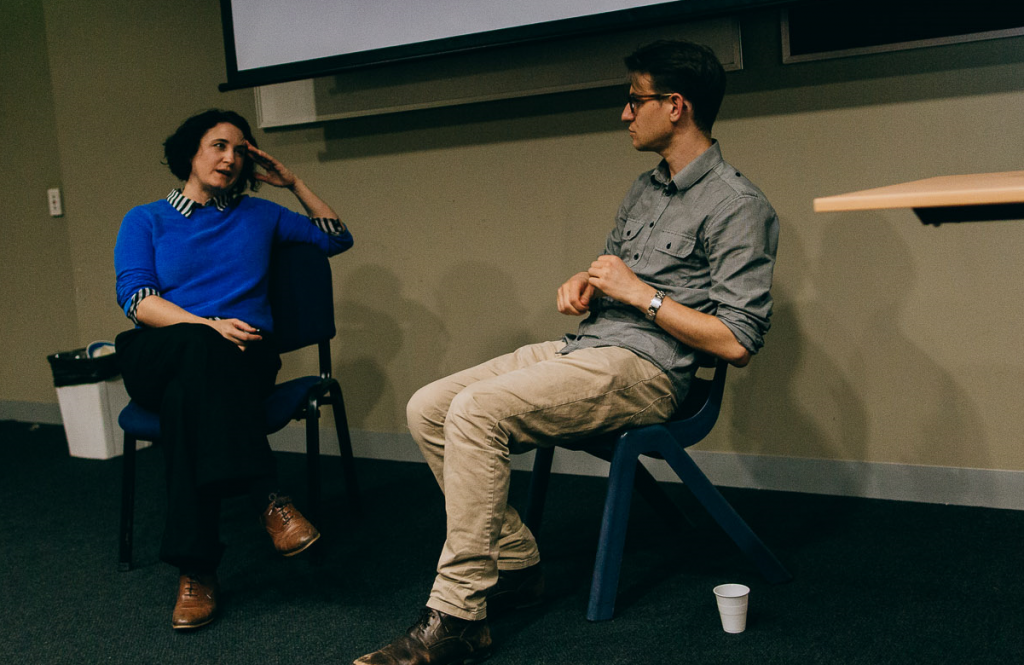 The production process was most unique, and Hyde’s description of the rules her team set for themselves makes the end product all the more impressive: the cast only received their lines a week before each shoot; the crew were required to use at least some footage from each of the 52 days of filming, and; that the footage had to be edited in chronological order in the final cut. There are, of course, not the drastic changes in appearance that take place in Richard Linklater’s 12-year venture, Boyhood (to which Tuesdays is often compared), but Hyde’s is a far more intimate project, and one in which her young actors grew in step with the characters they played. “Back at the start,” says Billie towards the end of the film, “I didn’t know how to be… how supportive, how angry, how worried.” In this way, we might also think of the film as a documentary of sorts, and indeed, it seems like a logical development for the team at Closer Productions, a collective best known for their work as documentarians.

And there is something very real here about the very regimentation of time that shapes the narrative. While Jane (Del Herbert-Jane) is experiencing the physical and emotional confusion of the transformation into James, daughter Billie (Tilda Cobham-Harvey) is told that she will not be able to live with her mother. Instead, the two agree to meet weekly to maintain their relationship. Although these encounters initially help Billie to understand James’s life choices, it is also their combination of pressure and routine that gradually upsets the bond between the pair. For Hyde, the weekly filming schedule had the opposite effect, with each shooting day a contingent and exciting new opportunity for cast and crew to collaborate on their developing work. 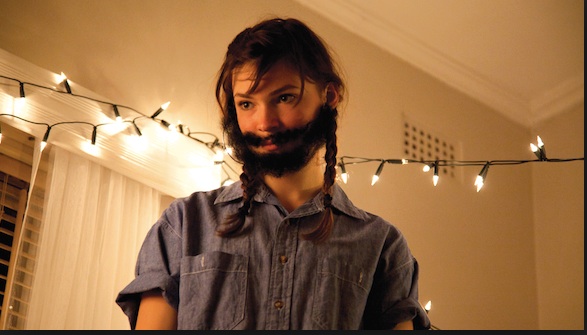 As Hyde suggested in an audience Q & A after the screening, she did not make the film to be mostly about transgender identity – rather, 52 Tuesdays was intended as a coming-of-age drama that would focus on the daughter instead of her parent. Of course, the various steps involved in the process of gender transition – hormone therapy, psychological evaluations – would normally tend to command most of the attention, given its relative unfamiliarity against the time-worn story of teenage maturation. But the narrative here is driven far more by Billie than James, with the former’s frequent video diary entries allowing her influence over the narrative, as we see a variety of changes taking place in her world (although it is precisely in this act that she is most naive, too, filming teen sex). Hyde pointed out that Billie was often the more emotionally responsible of the two, and the particularly rounded performance by new talent Cobham-Harvey demonstrated the way in which youth can often educate those many years their senior.

Added to these most conspicuous qualities of 52 Tuesdays is the atypical position it occupies on the Australian film scene. Put simply, it’s less identifiably “Australian” than the majority of films made in this country, which seem doomed to announce themselves first and foremost as products of the antipodes. When I asked Hyde about the extent to which the film wears its nation’s colours on its sleeve, she seemed to draw similar conclusions: although 52 Tuesdays was evocative of suburban Adelaide, it was nevertheless separated from the iconic Australian outback that marks some of its contemporaries (David Michod’s The Rover, for example), and even avoids the beachscapes that feature in other representative coming-of-age dramas like Bruce Beresford’s 1981 film Puberty Blues (also recently remade as a television series).

Hyde spoke of how her film was a faithful representation of life in Adelaide (my own place of birth), and indeed, the minimal number of different settings in the film evoke that city’s relatively quiet way of life. The majority of scenes are shot in suburban backstreets, in homes, in a warehouse that serves as a refuge for Billie and her friends, and in their school. But the relative sameness of Billie’s environment is contrasted with the litany of world-historical events that transpired during production. “How do you know what bits really matter?” she wonders along the way. 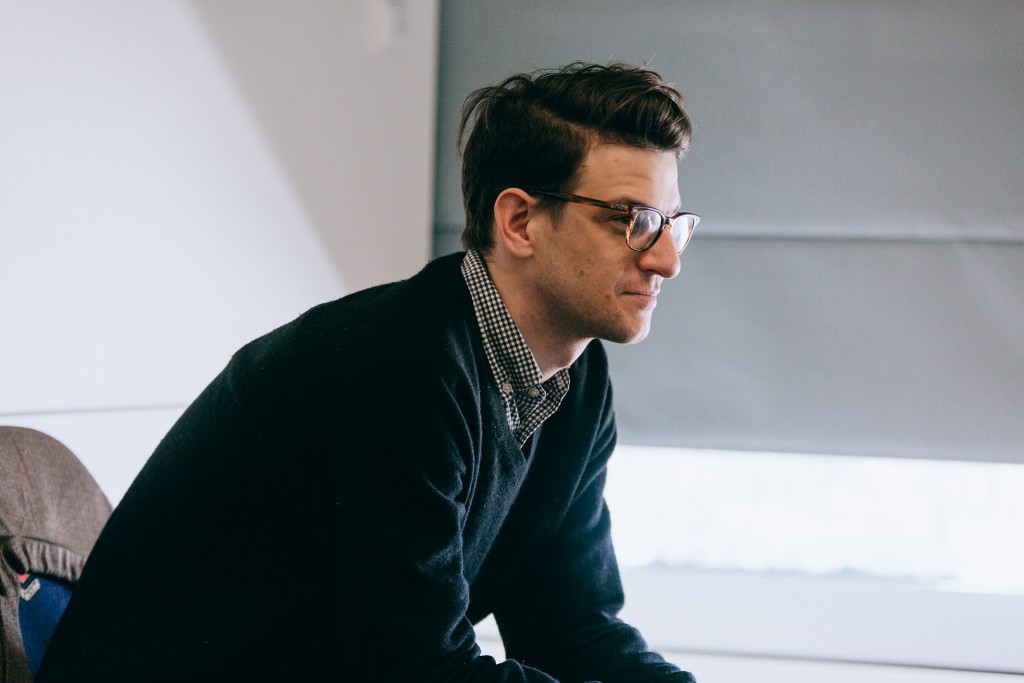 We are only shown snippets of what is taking place around the globe, but many of the images are recognizable. There is, for instance, a very brief image of the Costa Concordia, the cruise liner that crashed off the Tuscan coast in January 2012. There are also flashes of what Billie refers to as “all that Arab Spring stuff,” and “Occupy Wall Street,” although they might be completely removed from the experience of the young woman, and removed, too, from the experience of many Australians. The footage of “a glacier the size of New York” nearly splitting off from Antarctica is perhaps a little closer to home, and was oddly reminiscent of the use of the South Pole in Michael Winterbottom’s 9 Songs (2004).

In any case, the sense of Australian national identity in the film seems to derive mostly from the position of the country relative to the rest of the world. James ventures over to San Francisco, for example, in order to gain a better appreciation of transgender experience outside of his own city. Identity for James must be understood in a global context, by way of experiencing how those who are trans or non-gender identifying situate themselves against their own local and national backgrounds. For Billie, on the other hand, who is confined to her school and her city, her teenage identity is largely cultivated through experiences with her friends, as well as the news media that transmits footage of events from around the world. The video diary is thus hugely important for Billie’s worldview, and it affords her at least a little control over a life that is otherwise governed by her parents, and relationships that are dictated by the clock.

Hyde has also used this aspect of the film to create the My 52 Tuesdays project (my52tuesdays.com/). This is a worldwide, collaborative work, in which participants are posed a question each Tuesday – What lies do you tell yourself? Are you comfortable in the nude? What’s something you look forward to each week? – and then upload their responses as photos or videos, which they can choose to share with the community, or keep private. It’s a fascinating experiment that conveys something of the spirit of the film itself, and encourages audiences to think about their own identities (private and public), and just what it means to grow up.