The third day of the network activities in China saw a round table[1] to discuss two important strands from the conference: Huallywood, in honour of the establishing of the Huallywood Film Research Centre, and the child in film in China and elsewhere. 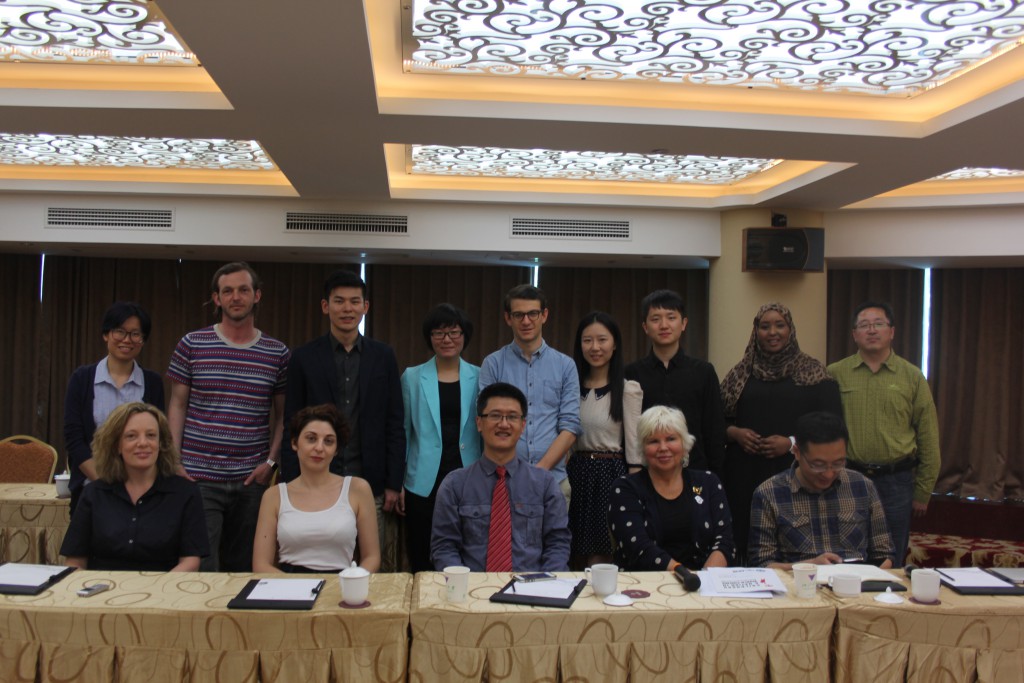 Conversations on the child on screen centred on some specific portrayals of children in Chinese cinema (for example, Rainbow Road, Wucai lu, 1960, and Lala’s Gun, Ning Jingwu, 2009) and the ways that childhood was tied up in issues of commerce and ideology but could come to portray some of the most urgent and pressing issues of nationhood.  Over the break, discussions branched out into fascinating observations on the effects of the relaxing of the one-child policy and social attitudes to the child in China in comparison to elsewhere in the world.

Visiting scholars were intrigued to know more about Huallywood, which we learned was a neologism derived from hua, the Chinese word for Chinese people and culture. As we discovered from the round table, Huallywood is a flexible, inclusive term that might be used to refer to cinema from China or Chinese diasporas.  The Huallywood Film Research Centre positions itself within transnational cinemas and as such it includes productions which concern or depict Hua people and, more specifically, co-productions with Hong Kong and Taiwan.[2]

As a portmanteau word, discussions of Huallywood centred on the perceived ramifications of a terminology which references Hollywood in its title.  Comparisons were made with both India’s Bollywood (which superceded Tollywood, coined in 1932 to refer to the Bengali Film industry) and the more recent Nollywood, which refers to Nigeria’s video boom. Unlike Hollywood, Huallywood does not refer to a specific place, industry or style. Unlike Nollywood, it was not named by a journalist/critic but instead is a neologism which has been coined by academics. Huallywood is considerably wider and more all-encompassing than Chinawood, which refers to Chinese films or co-productions produced at the Hengdian film studios.  Nevertheless, the Huallywood Research Centre will seek to establish links with Xiangshan Film and TV City and film studios.   The idea of establishing a connection with industry has stemmed from the two-fold objective of the Research Film Centre: to accumulate knowledge of Chinese cinema as an industry, while also seeking opportunities to attract more funds. I this sense, it aims to build up two poles of expertise, one more academic, the other more industry-based. In both cases, there is a desire to grasp the economic mechanisms sustaining the development of the industry of cinema in China as this is relevant to understand its increasing transnational orientation. Cinema audiences are surging in China (with some 30% growth over the last decade in box office receipts and with reports of 25, 000 screens, with 100 new ones built every week) and Hollywood is keen to cater for the Chinese market (as the case of tailor-made scenes only shown in Chinese markets featuring Chinese A-listers and Chinese product-placement in Ironman 3 bore witness).[3]  Was Huallywood therefore an opportunity to reflect on the link between ideology and commerce, or was it driven by a desire to forge a commercial path for Chinese cinema? An important research strand of the new Centre would be the studies of online reception to films which is booming in China.  There were also interesting discussions regarding the question of closeness or critical distance from industry and government in China and elsewhere, as well as the ways that state bodies and national film industries globally are supported by our writing.   The Chinese example reminded visiting scholars of the difficult entanglements of academic research, government funding, and commercial enterprise in Australia and the UK.

There are two things I need to emphasise:

First, Huallywood is such a contested notion that it is fraught with so many different yet controversial voices in China. e.g., one of the criticisms is that Huallywood – because of the nature of the “-llywood” – is a form of self-orientalism. While others think there’s nothing wrong to borrow/learn from America. There are also scholars who stress the “industrial” and commercial part of Huallywood, while others think the theoretical and methodological engagement and critical reflection are more important at this stage. Although this notion was first coined and developed by professor Shao, at this stage, I have to say, this is still a highly contested notion with so many different voices.

Second, the notion of Huallywood is new but the debates surrounding the naming of Chinese cinema have a history. As a matter of fact, naming is part of the debate in the history of Chinese cinema, from national cinema (Zhang Yingjin), Sinophone studies (Shu-mei Shih et.al), to Chinese language cinema and transnational Chinese cinema (Shelden Lu et.al). But these names are proposed and elaborated by overseas Chinese scholars. eg, Shu-mei Shih’s Sinophone studies is a way to escape the Chinese nation-state (i.e., People’s Republic of China) and ‘Chineseness’ as a PRC endorsed notion. Shelden Lu’s later transnational cinema, meanwhile, is a way to put together Taiwannese cinema, Hong Kong cinema and Chinese mainland cinema. Hence, transnationalism is a way to resolve the tensions caused by the political and historical reasons for these three cinemas. Huallywood is too new, and there was no systemic theoretical and methodological framework that sketches the notion. Having said that, I think Huallywood, and the discussions that came before Huallywood, are more complex than what we initially discussed about the polarised “ideology” and commerce. Of course, to many Chinese studies scholars, the tension between political ideology (socialism) and commercial desire (capitalism) seems dominant, but careful scrutiny will lead us to think about the nature of ideologies, and the historical conditions that exceed political ideology and commercial drives.

[2] The term Huallywood was coined by Professor Shao Peiren.  Members of the Film Centre helped to clarify the term in later, email exchanges: ‘Hong Kong, Taiwan and disaporic film practitioners may not identify Chinese national cinema/zhongguo dianying due to political, historical and cultural agendas. Therefore, using the term Chinese national or Zhongguo seems inappropriate. A more popular term to describe Chinese films is Chinese-language cinema. However, it is not unproblematic due to heavily relying on the common ground of language. Huallywood as a term may solve this controversial. “Hua“, the first syllable of the term, has a wider extension comparing with Chinese or Zhongguo. In Chinese, hua refers to not only Chinese nation/state, but also Chinese people, whose citizenship may or may not belong to China. In addition, the upsurging scale of the Chinese film industry means China could compete with Hollywood in terms of market size. This may stand as the reason why we have chosen “llywood”. It is admitted that Huallywood is not a perfect term. Some scholars raised concerns about the danger of self-colonization. They charge that naming the Chinese film industry with “llywood” is “dwarfing itself” to Hollywood’s colony”.

[4] With grateful thanks to Hodon Osman, Maria Elena Indelicato and Zitong Qiu for their help with information for this blog. 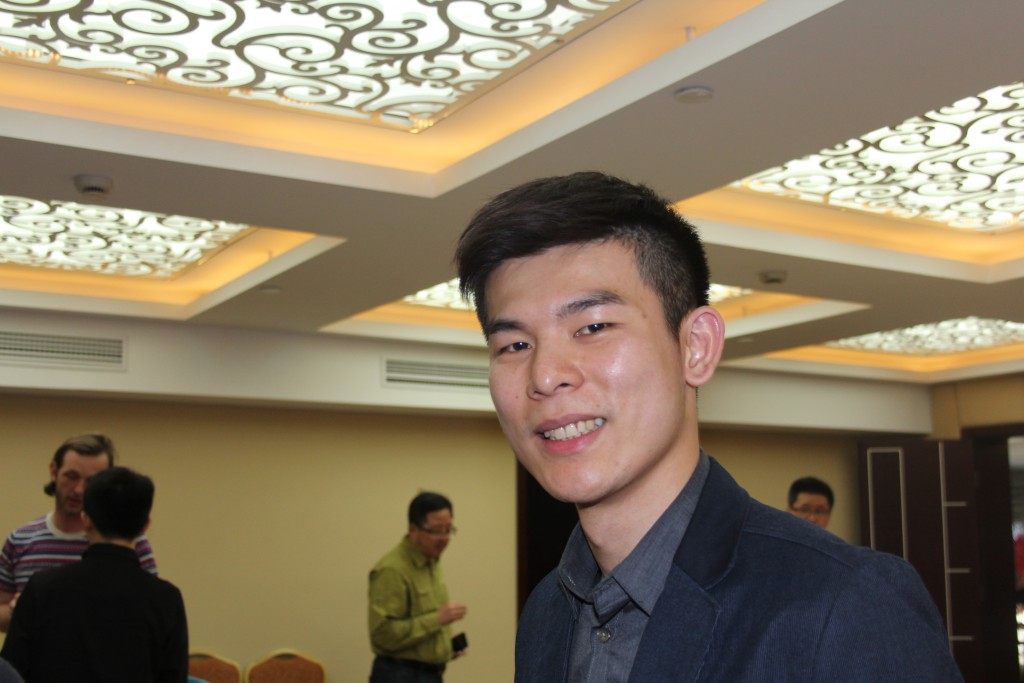