I’ve just spent a week collaborating for a second time with Sarah Wright from RHUL on the BFI project for schools called Cinema: Cent Ans de Jeunesse (Cinema, 100 Years of Youth). Two years ago we were working with Stephi Hemelryk-Donald in Birkenhead. This time we went to Strodes College in Egham (close by the RHUL campus) and we worked throughout half-term with a wonderful group of 6th formers picked by their Head of Media Studies, Simon Wright. This year’s theme is “Le Jeu”, which in French means ‘the game’ and ‘play’ (though not in the theatrical sense). This theme was revealed, cross-referenced and rediscovered in a fascinating assortment of clips chosen by Alain Bergala. Ranging over a wide variety of films from around the world and from every decade of the past century, we saw games, rules, cheats, playgrounds and imaginary worlds; we saw adults as children and play as transgression, and time and again this triggered wonderful exchanges among the pupils. It was a pleasure for Sarah and myself to facilitate and guide the conversation. 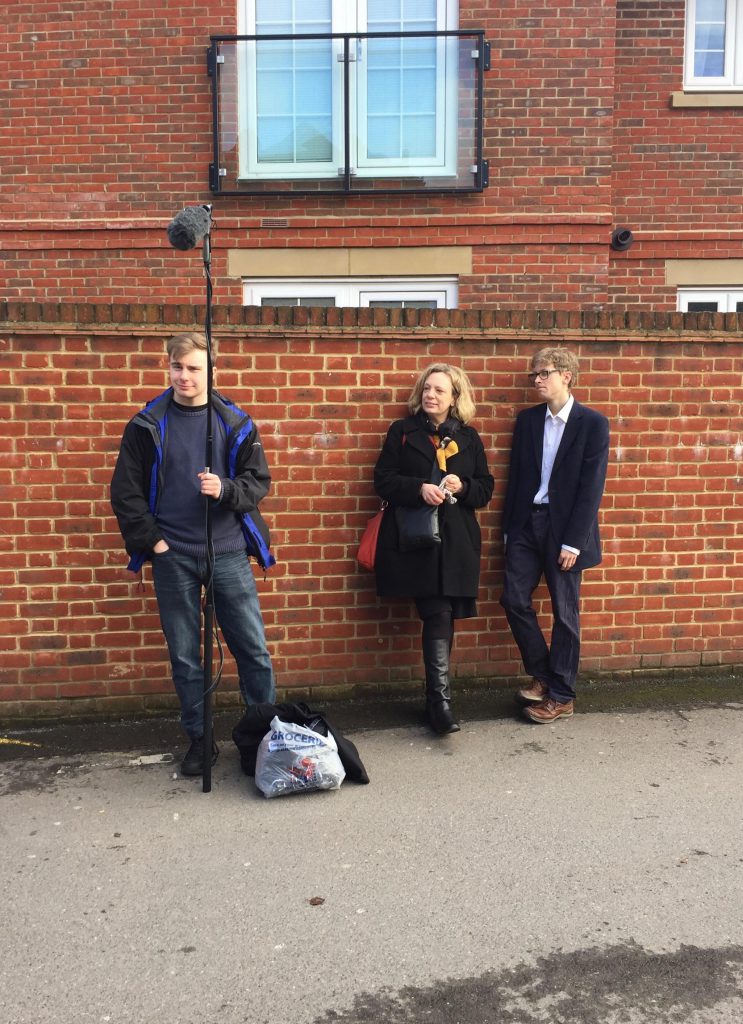 We also contributed clips of our own, from our particular areas of expertise. Sarah showed several wonderful clips from Spanish-language cinema, including Pan’s Labyrinth (del Toro, 2006) and a hair-raising clip from the start of El Bola (Mañas, 2000) where street kids run in front of an express train for thrills and kudos. I sought to counterpoint the clips from Truffaut and Rossellini with the football match from Kes (Loach 1969). And in an effort to offset the sombre tone of many clips, I screened the opening scene from Frozen (Buck & Lee, 2013), where two sisters turn their hallway into a magical frozen playground, as compared to the Lumiere Minute La Bataille de Boules de Neige (1896) where a real Parisian street is turned into a playground and a hapless cyclist who strays into the arena is pelted with snowballs.

This prompted one pupil to make his own contribution: the Lumiere scene reminded him of the opening scene of Napoleon (Gance, 1927). He had the DVD at home, so next day he brought it in and shared it with the group. It was much enjoyed, particularly the way that Abel Gance superimposed the disembodied head of Napoleon over the snowball battle as if he were masterminding it. Several pupils noticed the same technique being used in the clip from The Color of Money (Scorsese, 1986) where mastermind Paul Newman watches Tom Cruise play pool.

But the core idea of Cinema: Cent Ans de Jeunesse is how theory must always be interwined with practice and vice-versa. So each afternoon the pupils made short films of their own to explore the theme of play before we turned our thoughts to the Film Essai, the final project, in which pupils are instructed: “to make a film where the story is interrupted at a certain moment when the main character finds their freedom through playing which allows them to fork off from and escape their reality.” A fascinating discussion ensued and all the pupils suggested good ideas but in the end they had to settle for just one and happily a consensus was achieved.

The chosen idea – about a beggar who escapes his grim reality by dressing up in a discarded suit and ‘playing’ at being rich – seemed to capture both the positive and the dark side of ‘play’ that we had observed in the clips. And the story’s resolution – he sees the danger in the game he is playing and renounces the suit – seemed to me to resonate with the poignant ending of the clip from Chaplin’s Gold Rush (1925) where the magic ends and the tramp goes back to being a tramp. 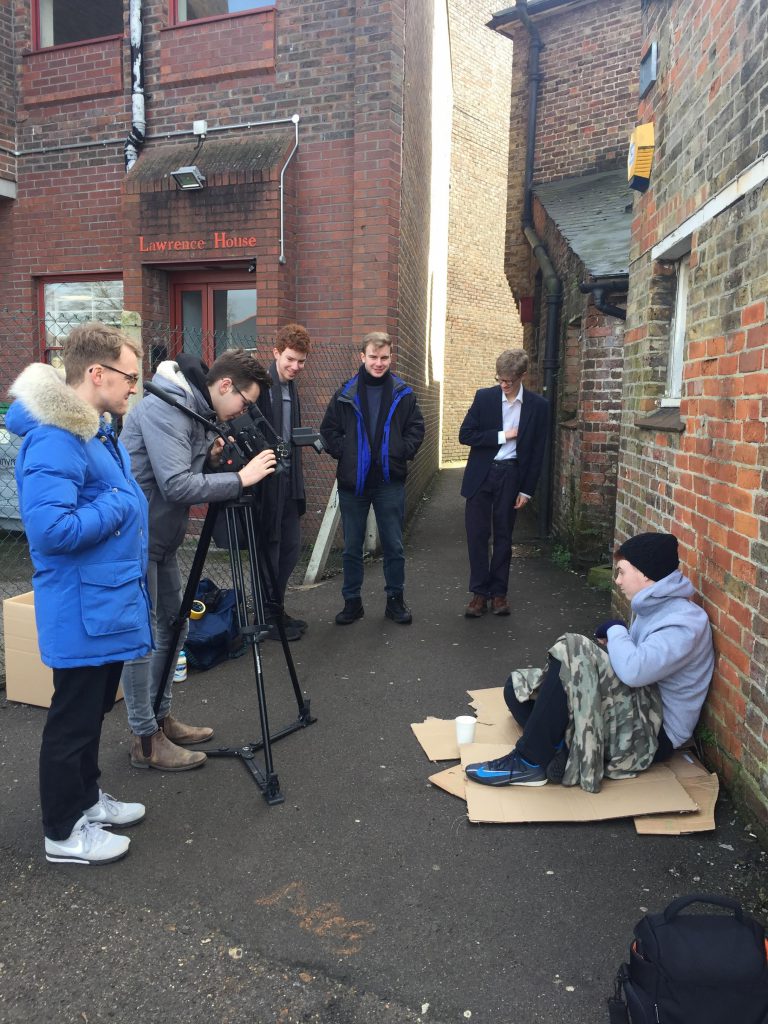 On Thursday we were joined by Simon Wright – thank goodness – back early from his half-term break to oversee the shoot with his wonderful brand of low-key authority. The quality of his teaching could be seen in the confidence displayed by all the pupils in their use of equipment and grasp of practicalities. Indeed, they seemed to be “playing” as they made the film: playing by the rules, working as a team and taking pleasure in their ‘shots’ hitting the target (!) They also cheerfully participated in the film as actors (known in English as “players”) and got their teachers to join in too. And they were most impeccably tidy student film crew I have ever seen, leaving not a trace of rubbish behind them, even after filming in a cruddy car park! 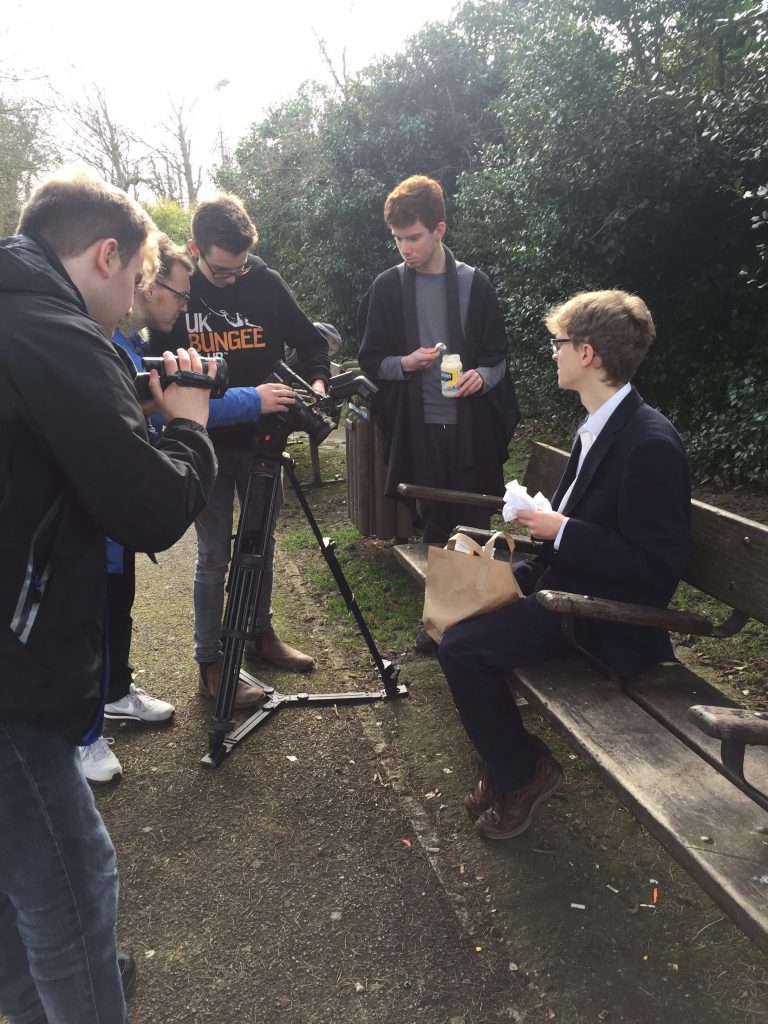 They got straight down to work editing on Friday, and made such good progress that by the end of the day we were able to watch a rough-cut. Since then, I’m told they’ve put in extra hours after school, so that any day soon, the film will be finished and Sarah and I can drop back into Strodes to watch it. And thereafter we’ll be proud to share it with other participating schools at the BFI Screening in June. Once again, it has been a privilege and a pleasure to play my part.

There are currently no posts for this event.